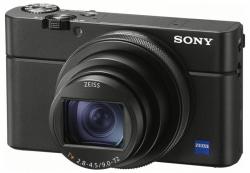 Digital Camera - CMOS Exmor 20.1 Mpx, 8.3x zoom (24-200mm f/2.8-4.5), 4K video (3840x2160), 3" LCD, Li-Ion, SD/SDHC/SDXC, WiFi, Face Detection, intelligent stabiliser Sony RX100 VI SpecificationsSensor: 20.1 MP 1-inch type stacked CMOS image sensor24-200mm f/2.8-4.5 equiv. zoom lens24 fps continuous shooting with full continuous AFRetractable 2.36M-dot EVF3-inch rear touchscreen LCDUHD 4K video at 30p and 24p along with 1080p slow-motion captureWi-Fi and NFC CapabilityOne SD card slotAnnounced in June 2018, the RX100 VI is the latest iteration of the Sony’s RX100 series of pocketable high-end compact cameras. The last few years haven’t been kind on point-and-shoot cameras with smartphone cameras now the tool of choice for most casual photographic situations. This has nearly eradicated the point-and-shoot camera market, but one niche segment remains seemingly unscathed: advanced bridge cameras like the Sony RX100 VI. With its large 20.1-megapixel stacked 1-inch imaging sensor, the RX100 VI captures more detailed images and video than any smartphone. In times past, the powerful sensor was enough of a selling point, but over time, Sony has had to continually add new features to make the RX100 series more competitive. On the RX100 V, that meant increasing the burst rate to 24fps and adding advanced focus features. With the new RX100 VI, Sony has gone with an 8.3x optical zoom range with a f/2.8-4.5 variable aperture 24-200mm equivalent lens. That gives the Mark VI noticeably greater reach than the 24-70mm equivalent lens of its predecessor. However, there is a tradeoff as the new lens’s maximum aperture settings of f/2.8-4.5 are a lot narrower than the f/1.8-2.8 range on the 24-70mm lens of the Mark V. This not only means that you’ll be losing the shallow depth of field capabilities of previous RX100 offerings, but it also means noisier images and videos in low-light settings. Despite the new lens, the RX100 VI is the same width and height as the Mark V and only 1.8mm thicker which results in a camera that is ideally suited to a wide range of photographic applications while remaining genuinely pocketable. The RX100 VI retains the excellent 315 embedded phase-detect autofocus point system of its predecessor which means a confident focus performance in both stills and video. The camera features the same popup XGA OLED electronic viewfinder of the Mark V, and it now functions via a single-action mechanism which allows you to pop it in and out with ease. For vloggers and videographers, there is a 1,228, 800 dot 3-inch screen that can tilt up by 180 degrees to directly face the subject, and in a first for the series, it’s also touch-sensitive. The RX100 VI is also the priciest RX100-series model to date, coming in at $1,200, a $200 price increase over the Mark V’s debut price. At this price point, one could buy a mirrorless or DSLR camera with a larger APS-C sensor and a lens or two, which places the RX100 VI in the awkward spot of having to compete with cameras with much larger sensors and more versatile ecosystems. The real question is if the RX100 VI’s small size, versatility, and an all-in-one package can carve out enough of a niche to make it a worthwhile purchase.