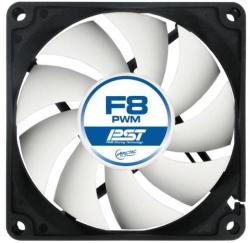 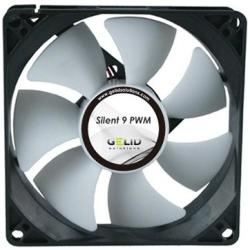 As a result, when the system load increases, fan speed of all fans connected in the PST system will be increased in order to lower the case temperature. Likewise, when the load is low, these fans will operate at a relatively low speed for sufficient cooling.
In conclusion, the advantages of having PST are:
(1)Control the speed of different fans with only one PWM signal from the mainboard(2)Case ventilation can be achieved in a quiet and efficient way. More fans run slower at low load, which deliver sufficient cooling at a much quieter operation than before(3)Better energy saving as fans are not always at full load         PST:  PWM amplifier integrated on motor circuit  4 pin plug for receiving power and PWM signal from motherboard  4 pin socket for CPU cooler or second fan  3 pin plug to send fan RPM signal to motherboard Dimensions: 80 L x 80 W x 25 H mm Rated Fan Speed:  700 - 2000 RPM (controlled by PWM)
Air Flow:  28 CFM / 47.6 m 3 /h Noise Level:  0.3 Sone
Weight:  70 g Bearing:  Fluid Dynamic Bearing                     10 / 2009
Techgiant : Arctic F PWM Fan Series
Thanks to the patented PWM Sharing Technology the fans from ARCTIC COOLING stay silent but still work effective, specially when several fans are linked by PST.
The buffered-mounting makes the fans spinning silently, even under full load.   10 / 2009
Freeocen. de : Arctic F PWM Series
Finally we can say, that ARCTIC COOLING launched with the ARCITC F PWM-Sereies a very nice product. The fans were pleasantly silent, when they were connected to a PWM-socket.
The PWM Sharing Technology is a great feature giving the chance to control a complete case-fan-system via one PWM-Signal through the BIOS.
This way its easy to setup a case-ventilation system without the need of a fan-controller and create a silent yet powerful system.